Hello,
I noticed your defence of Jenny the Hermit in Global Chat and just wanted to thank you and let you know that you are spot-on about what happened. She, myself and another player joined this game from another one; she and the other player quickly used Tenaril to relocate to the area in question in Farshards; they specifically chose that spot because it was it was unoccupied and relatively desolate, and had no way of reasonably knowing about the "land claim" that she encroached on by a mere 10 squares. They also sieged and brought the other player down to zero before doing so to Jenny. In both cases, they messaged at one point that they would give them 14 days to move before attacking, which I think is an unreasonable amount of time to give a brand new player to be able to exodus, since they had each obviously used their Tenaril already. In Jenny's case, buck1 messaged her on July 20 saying she had 4 weeks to move. As you can see, she did not receive nearly that. I think it's quite clear that the actions of RofC can only be described as bullying of a player who could not possibly have (and I can assure you would never have) presented any threat to their alliance. There wan absolutely no need for urgency on their part in asking her to move: she was not any threat to them or in their way for any reason, and the misunderstanding was entirely forseeable, as there is simply no readily available information on land claims, particularly to new players.
Thanks,
<REDACTED>


Also worth noting: They DID give the option to join RoFC also, but why would anyone want to join and pay taxes to an alliance that treats new players this way?


As you can see, Jenny was given well under a week after being promised four... given the considerable time and resources it takes to get exodus, it would likely have been impossible for her to even attempt to move.

Interestingly, when buck1 was a new player, he accidentally settled a town well within my 10 squares. Rather than razing him, I helped him grow and gave him plenty of time to exodus. It would've been nice to see that paid forward.

Posted by Illyriad Telegraph at 15:11 No comments:

RoFC Force One Town Player Out of The Game 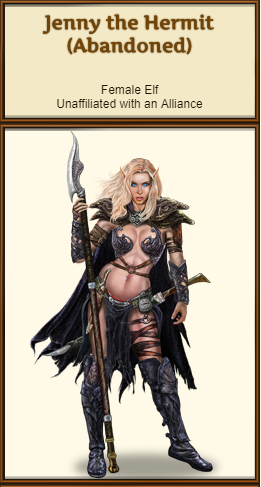 RoFC have started to crack down in their landclaim leading to them noobringing at least one 1 town player causing said player to abandon.

Jenny likely used her Tenaril's Spell of Ultimate Teleportation to move into Farshards, not knowing about the landclaim. She had never joined an alliance (judging by her username, she intended to remain unattached) meaning she had no support against RoFC.

The people in RoFC who sieged Jenny were Saxon and Moksha as she faced a double siege.

After the sieges landed, Jenny abandoned and she has since been noobringed.

Within hours of this happening, Snot of RoFC was in GC talking about how RoFC were going to 'Make Illyriad Great Again'. When I brought up Jenny being forced out of the game, I was described as 'fake news' and a 'troll'.

Many others in GC joined me in my public criticism of RoFC but when did people even start to think this was OK? RoFC has had a history of attacking small, largely defenceless accounts; that's what led to the Hobblez situation that has also been reported on here. This is not a one off, this is how RoFC act.

I'm going to be messaging every single non-RoFC aligned player in the RoFC landclaims of Farshards and Lapo'a Lua offering them aid with moving and a place in Cala or VAST if they want. If you would like to support those who are facing a similar situation to that of Jenny the Hermit, get your alliance leader to send me an IGM and I will add you to the list of people taking in those who are being assaulted by RoFC.


EDIT:
Iron have cancelled a NAP with RoFC, saying that they do not wish to be associated with RoFC anymore.

Posted by Illyriad Telegraph at 11:20 6 comments: