How the war really began.

Normally, I wouldn't publish the following IGMs but given the amount of lies Snot has been spouting in GC about the start of the war, I feel I have no choice.

Notice the date on that IGM. War was declared by Aesir in December.

As for why this war happened, it happened as a result of TA2IN imposing a cartel on Silversteel sales. The SINdicate started this war, but fair enough they are war players. Most players in the SINdicate are pretty honest about that. Snot however likes to label her enemies the warmongers. 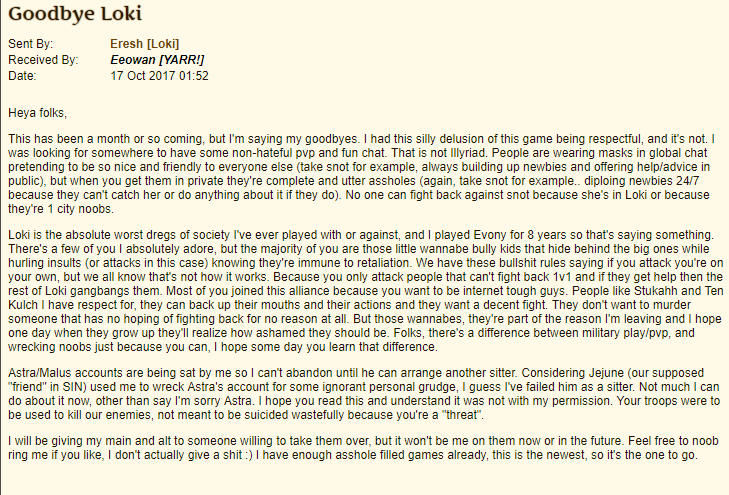 At the time this IGM was sent, Eresh was in Loki leadership.

Author: Eowan The Short.
Posted by Illyriad Telegraph at 11:04 No comments:

I conducted an interview with Karl Aegis of IRON about Loki's involvement with the IRON/RE war. I did get in touch with Fiona of Loki but she said no comment. If anyone else in Loki would like to give a comment then they can get in touch with me or just post in the comments anything they'd like to say. I'll post it here as well provided that proof of identity is provided in the case of comments here in the form of an IGM letting me know it was them.

IRON vs RE War

As with their last war, Roman Empire [RE] has declared on an alliance around 40% of their size by land claimed. Last time it was The Company [TheCo] for violating a land claim they never publicly asserted (see our story on The Invisible Land Claim), a one-sided war that TheCo never recovered from. This time it was against Iron Crusade [IRON], where they had a 200% advantage in terms of land claimed, and nearly 300% including their affiliated alliance REBEL. The backbone of IRON is a number of former members of The Unfettered [TUF], who have been in alliances like Asatru [Loki] and Screaming Valkyries [SV] in the meantime.

RE have not made public an casis belli for their declaration of war, but IRON were building up a presence near their land claim in Westmarch, and they might have been afraid that if they did not strike while they could, their land claim would be under threat. The war so far has not gone so well for RE, who might have expected IRON to be a pushover: despite IRON being unprepared for war, as Hyde has explained on the forums, RE have tried repeatedly to siege Spektor’s town of Hilland I, so far losing massive amounts of troops to have their first siege, smaller, broken (with help from HELL, who afterwards stopped helping IRON) and their second, larger, so far being badly damaged. Patience King, leader of RE has dismissed RE’s failure in the first siege, claiming that IRON would crumble under RE’s future offensives.

RE claim the title of Invictus, or unconquerable, on their profile. Will they end up being beaten by a far smaller alliance? An alliance that has, in the meantime, picked a fight with Loki. Anything other than a decisive victory would be an embarrassment for RE.
I reached out to Patience King and Agalloch, leader of Iron, for comments on the above.  First, Patience King:

> The war is going great and as planned the first siege was a test for hellfire to see if they would assist which they did RE declared on hellfire and after negotiations I secured a satisfactory deal with cerdarman . I don't care about population or size iron can keep using that excuse RE has declared on larger alliances without issue.

> The second siege did it's job iron forces attempted and failed to break our siege forces, ( our blockade and siege stayed up without issue in iron heartland ) so they relied on sitting each other in order to kill a small storm force which they managed to do .  The siege is seen as a success all my armies from all my cities including my alt are marching back with numbers intact and we will continue immediate offensives. Iron has been trying to exodus military cities down to aindara which get cleared by RE forces immediately while the cool down period is in effect.  Any comments that the war is not going well is idiotic and Rome will win and any notion that iron would have the ability to beat RE or make it surrender is a laughing matter NO one has razed a city in our heartland apart from SIN I highly doubt Iron can do anything they can't even defend themselves anymore .


Then Agalloch:
> I think the facts of the war so far speak for themselves,IRON is about 3 months old, although a lot of our players have played before we are returning players with only a few weeks of building our new accounts, REs inability to raze us is quite laughable in itself considering they been around for years and should have been able to wipe us off the map by now.Not only are they unable to raze us but they are also coordinating with a loki player to land a double siege on us, is it cause they are unable to field two sieges at the same time themselves? makes you wonder ......

> ALthough we werent looking for a war at this stage of our growth I am looking forwards to the ongoing hostilities,RE is welcome to bring as many alliances in this as they want, it wont change the fact they suck at war!

> Also our not launching any offensive ops so far doesnt mean we are incapable of it,we like to have a certain amount of succes in offensive ops otherwise there is no point due to the high ammount of troop losses a siege requires on the part of the attacker, the objective is to destroy the town and demoralize the enemy not some lame ass excuse about eating up enemy troops as some might claim. Anyone that says sieges are fakes or intented to eat up the enemies troops is living in another dimension.


-Alti
Posted by Illyriad Telegraph at 22:40 No comments: